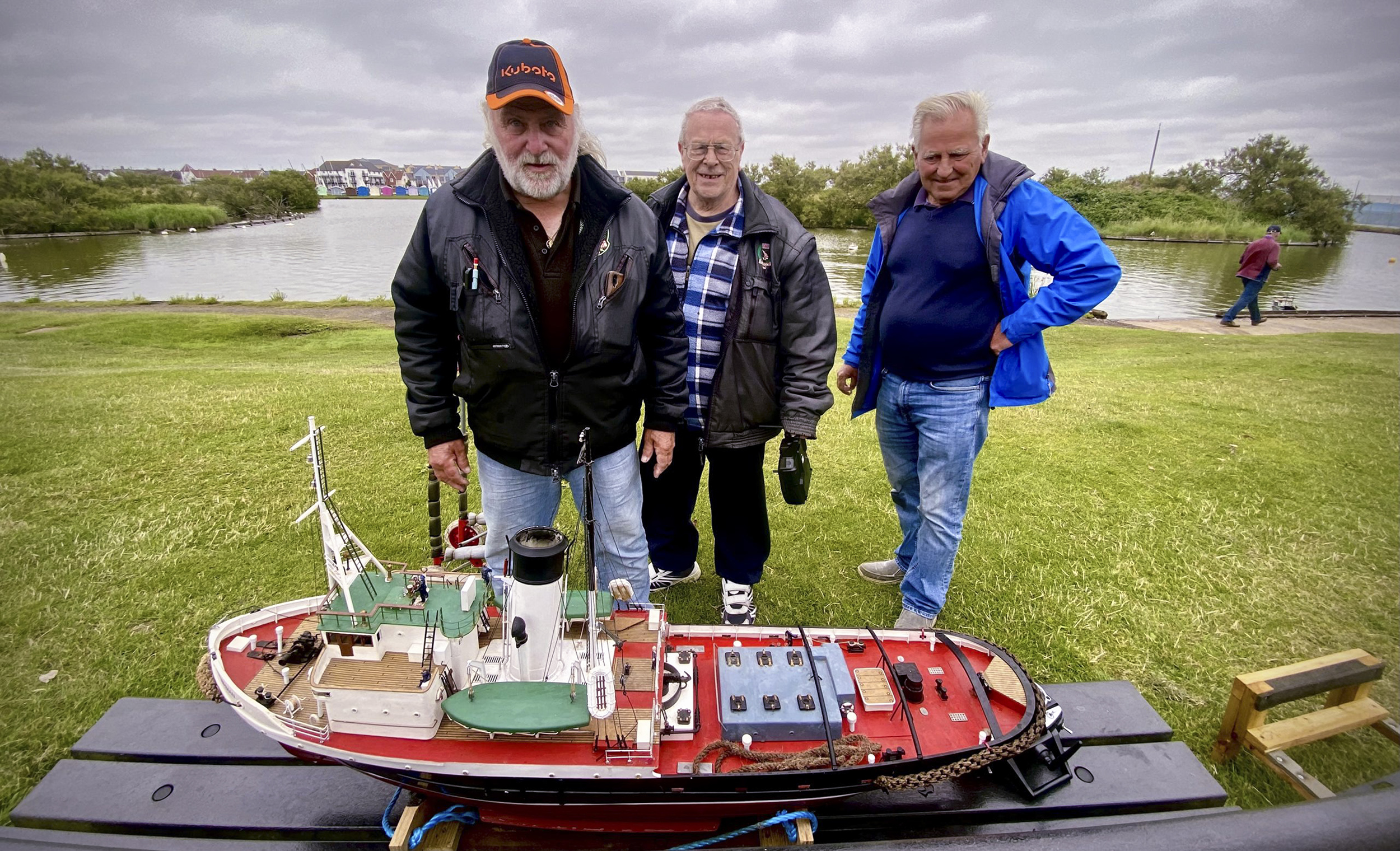 Back at Brightlingsea harbour for today’s start. Every day we begin again where we left off, not missing a single step. But today we are immediately diverted. As we pass the open air lido on the seafront, we notice a small lake with model boats and yachts moving around. On the grass beside the lake a group of men are clustered around the model of a Thames barge whose rigging has broken. “I got into it after I sold my American cars,” says Barry, “I had a 1959 Ford Fairlane and a 1961 Cadillac but they got too expensive to run.”

I’ve never understood the attraction of model boats, but Barry has an explanation: “Summin to do, innit? At the end of the day.” A replica tugboat from WWII has got stuck, pinned against the island by the wind, and there’s a moment of drama as a swan approaches, but it breaks free and zips across the bows of a replica lifeboat controlled by Paul who is sitting on a distant park bench. Barry says that the model boat club is seeing something of a renaissance, driven by men fed up with drones and the new legal requirements for them. I ask if they ever race their models. “The yacht boys do race,” he says, “But not like in Harwich.” He shakes his head. “Harwich. They are mental. I mean mental.”

We move on and follow the sea wall up the creek passing Mersea Island away to our left. There is the crackle of distant gunfire for an MoD firing range. The tide is receding and the foreshore is dotted with birds: redshank, black-tailed godwits and gulls. Ali tells me about her experiences as an 18-year-old, travelling in Southern Africa soon after Zimbabwean independence. She had been so appalled by the racist bigotry that she decided to spend her life working against it: hence projects like this one, attempting to bring people together and foster conversation and understanding.

By lunchtime we reach Wivenhoe, then catch the ferry with Paul, the former mayor of the town. “My greatest achievement was getting a basketball court built,” he says, “But I didn’t enjoy all the complaints and wingeing.”

He gives us a little river tour. There are a surprising amount of wharves where big ships used to dock. “In the 60s Russian ships would come and the whole place would get drunk on vodka.”

Ali, John and me get dropped off on the other bank at Roughage, as Paul calls it, officially, Rowhedge. For the first time in a long while it is just the three of us and soon the footpath becomes tricky. We skirt the MoD firing range from which we had heard gunfire earlier. Signs repeatedly warn us not to leave the path, but then the path disappears into impenetrable nettles. We improvise a new route that avoids the range, but emerge on a road to find the next field inhabited by a large bull, several cows and many calves. We hesitate, then decide to use the road, but a large 4×4 pulls up. “Are you lost?”

I explain our plan. “The footpath is diverted,” says the man who I notice is wearing military clothing. “You must go through that field.”

“Then you must go back.”

“We won’t do that. Our map clearly shows a public Right of Way down this road.”

He shakes us head. “The path is closed, but the map hasn’t been updated.” By now a whole convoy of large black vehicles with blacked-out windows has backed up behind him and they start honking their horns impatiently. I have a deep-seated aversion to cars like this. It takes me back to a previous life when, in war torn countries, bully boys with guns would drive them and would like to tell you where you can and cannot walk.

“They had to do it,” he adds. “The coastal path couldn’t be routed through a firing range.”

He revs his engine and accelerates away. My phone is in my hand and I raise it and take a picture. He stops by the gate into the bull field, where we are now retracing our steps. His window comes down. “Why did you take a picture of my car?”

“You are telling me to cross a field with a bull in it. If anything happens, I might want to find you.”

He rattles out his name and rank. If he had done that at the beginning, we might not have had our little confrontation. Then he is gone. We walk across the field. The bull has slumped down in the heat and gone to sleep.

We come to a very busy road. The much-vaunted ‘coastal path’, the one that avoids the coast, now takes us along this road for a mile, a nerve-shredding experience as there is often nowhere to hide except in the hawthorn hedge. Many cars politely slow down. Many do not. I recommend this experience to all walkers out there. It’s the B1025 between Colchester and West Mersea. Once you have done it, you will be radicalised and furious, like Ali after her journey through Southern Africa, ready to do battle on behalf of all footpaths. 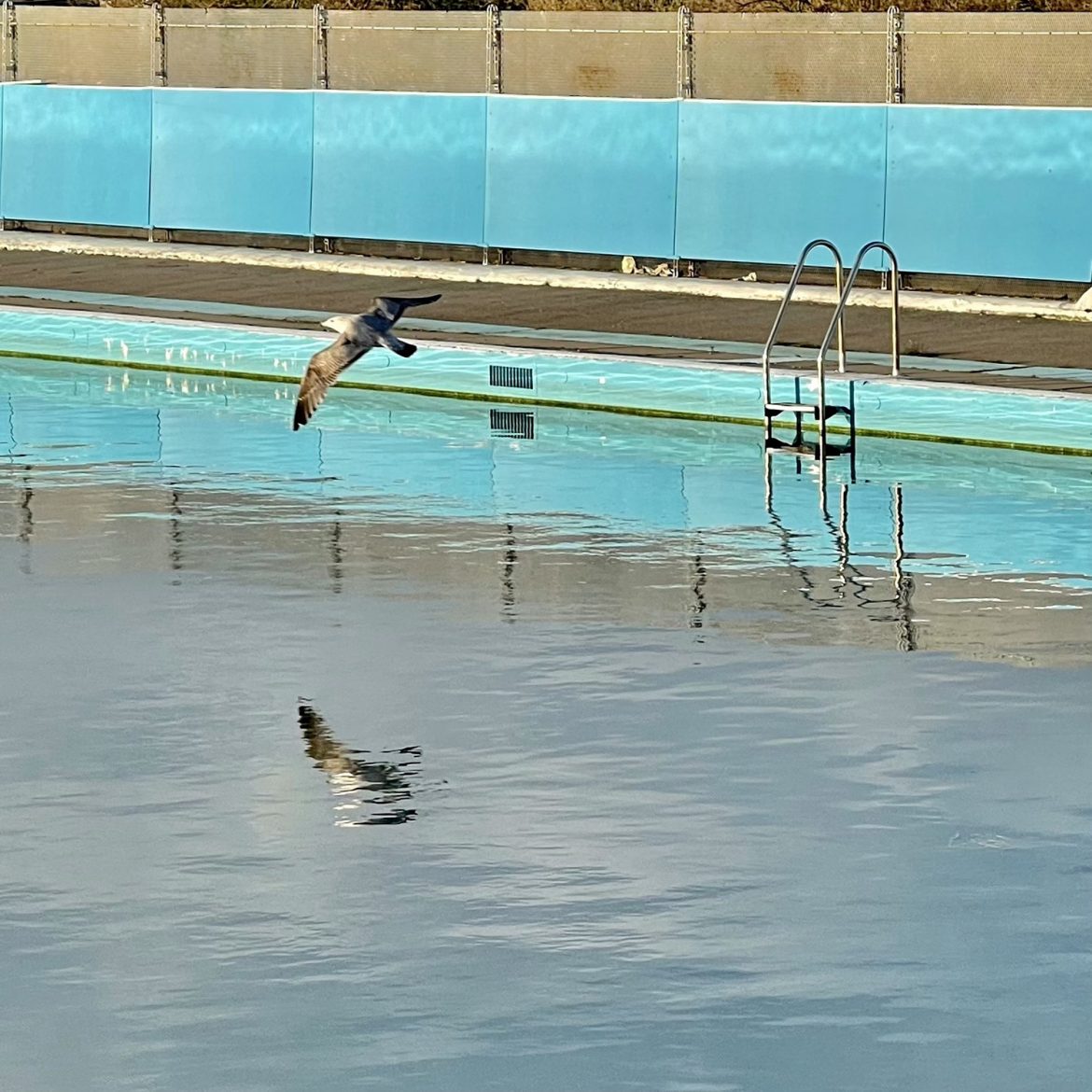 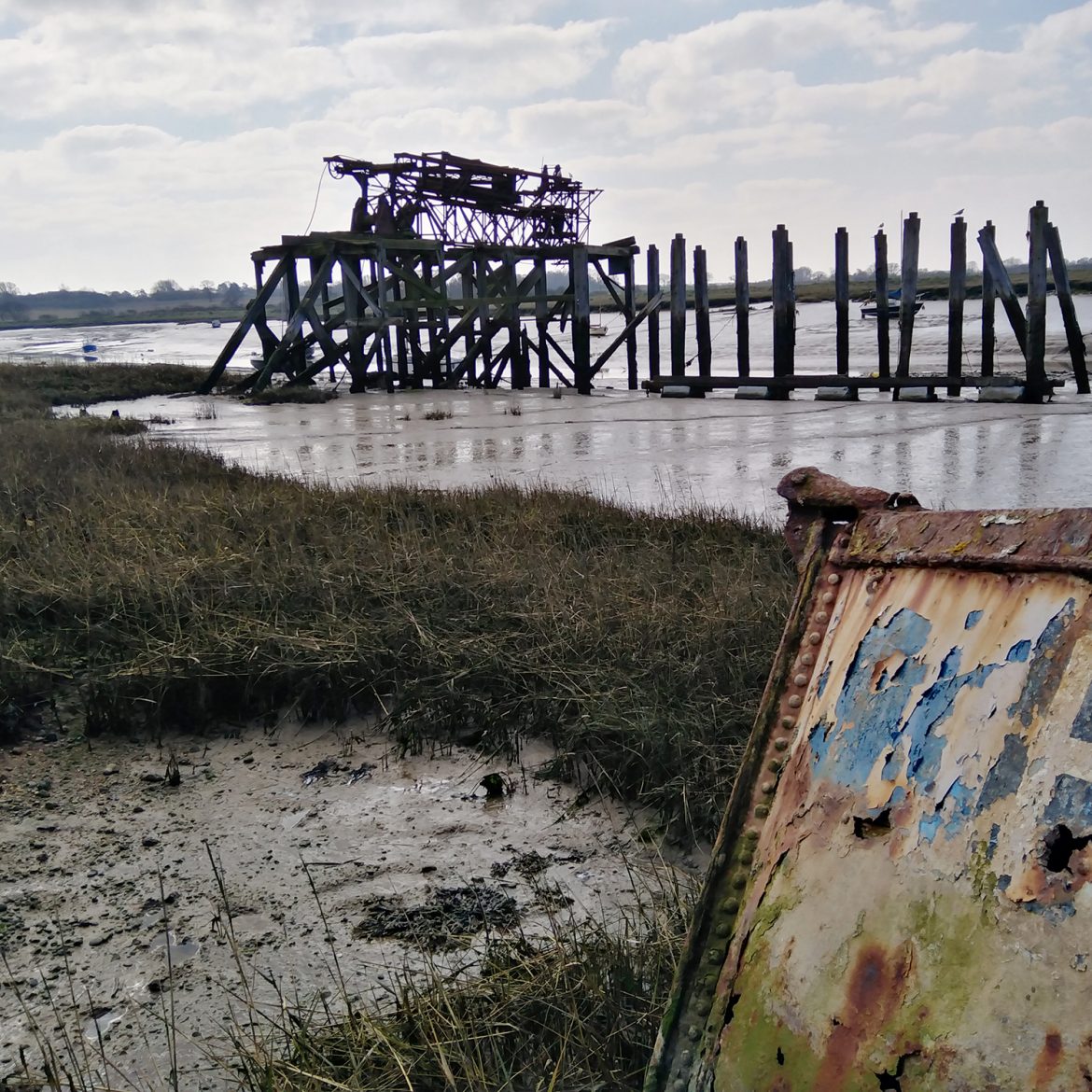 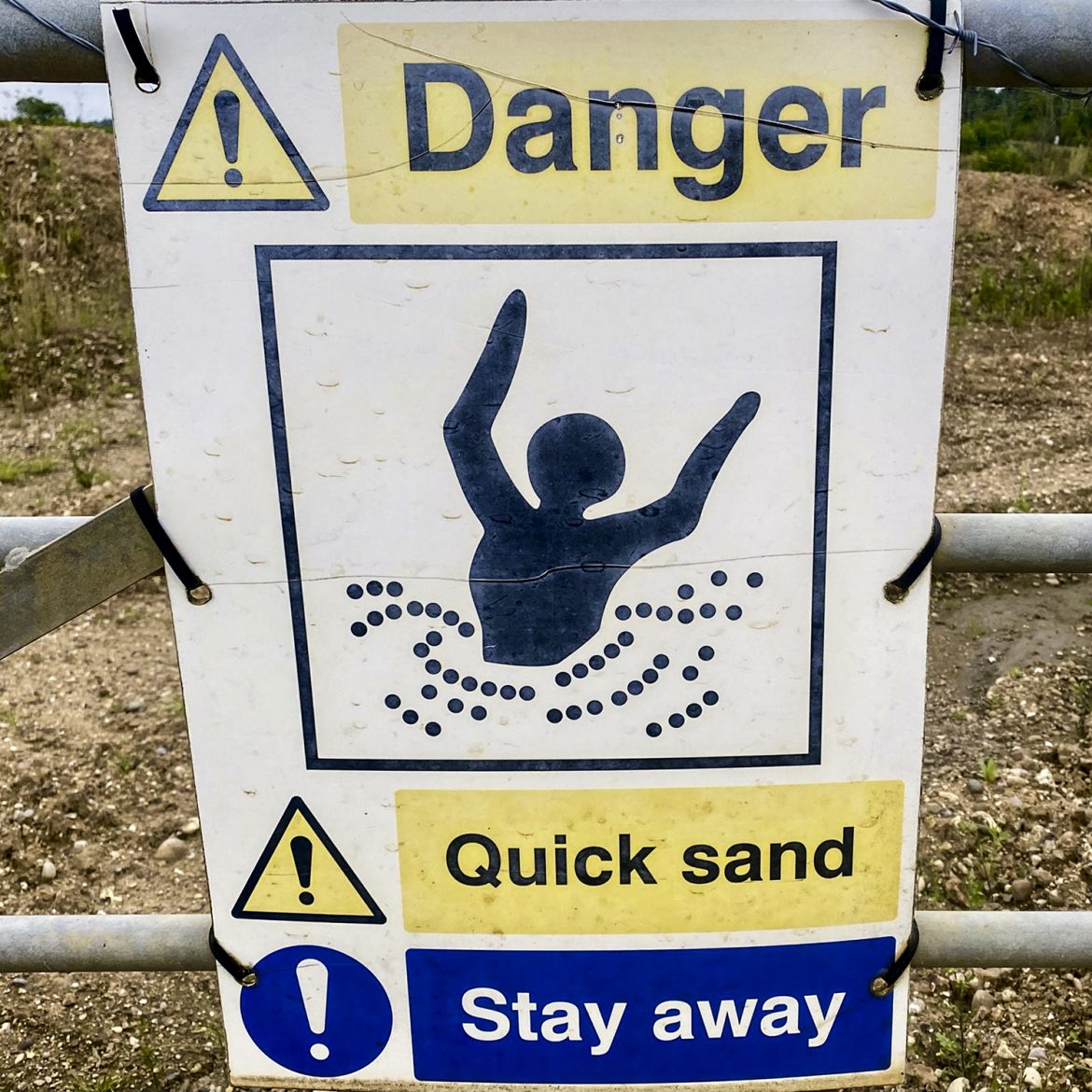 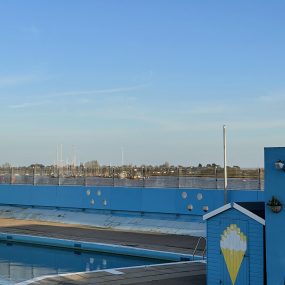 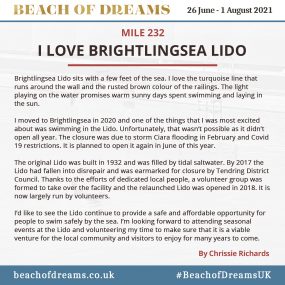 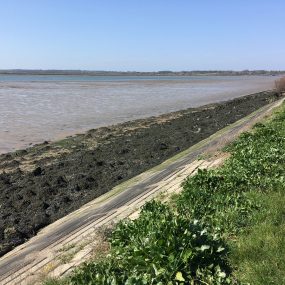 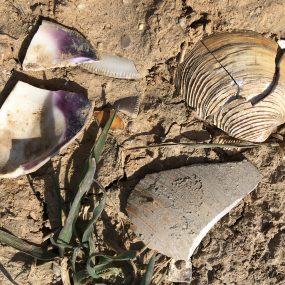 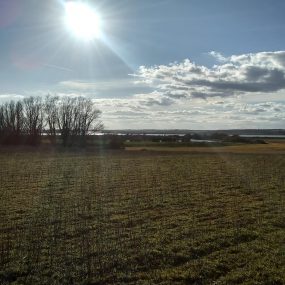 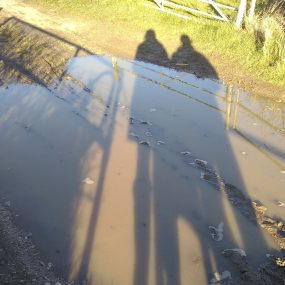 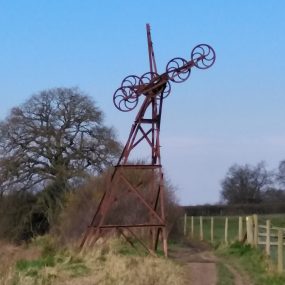 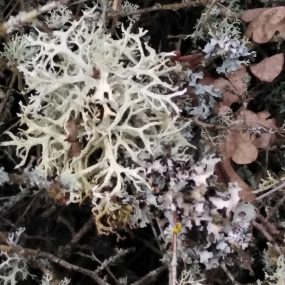