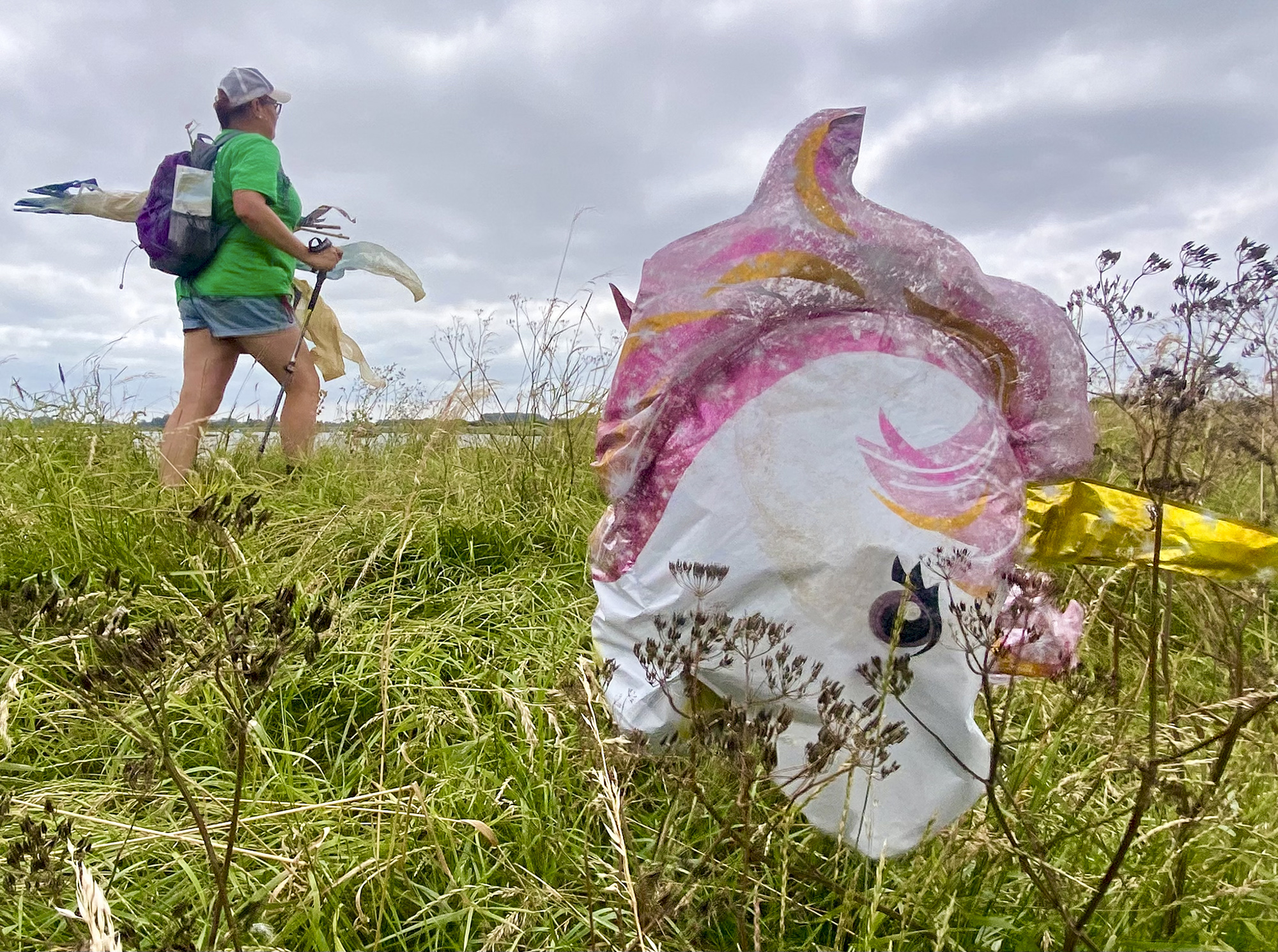 As we move ever closer to the end, there is a growing sense of the importance of health. Something quite small could derail the entire project. With over 380 miles completed, it would very frustrating to fall by the footpath, foaming at the mouth, legs in a blotchy tangle, utterly unable to control bodily functions, waving at the others, “No! Don’t stop”. It’s a great comfort to know they would be genuinely sorry to have to press on. Ali swallowed a fly yesterday and could have choked to death if not for swift intervention. John’s legs continue to swell occasionally, then subside. The hole in my foot, which I now see as the kind of stigmata a pilgrim must bear, gets sand in it early on today. I thrash through nettle beds on the outskirts of Rochford and they do help take my mind off it. Thank God I’m wearing shorts.

Today we have a mixed and interesting group along. There’s university lecturer Michael whose sister taught Ralph Fiennes to ride for his role in Wuthering Heights. There is Gloria who seems to have owned every British sports car ever made. There is Martin who drives trains, but is fascinated by the Burning Man festival in Nevada. “I’ve done five Burns. First time I went I made friends with Ruby, a six-foot seven-inch ex-champion weightlifting transexual. She came over for my wedding.” It’s just not what you expect from someone coming out of Liverpool Street on the 08:43 to Southend Vic. And there is Gina. We hear Gina before we see her, but when we see her we know it’s Gina because she has GINA written in large letters across her chest. When Gina talks, we soon realise, it pays to listen.

When we get to the sea wall, she goes foraging for sea purslane, meadow salsify and arrow grass. She talks about kayaking down all these creeks. She talks about art and history. Her great great grandad fought for the Union in the American Civil War, sailed in an ironclad, and married a woman whose cousin was best mates with Charles Dickens.

The miles are swallowed up. We pass the point opposite Paglesham where the Beagle, Darwin’s ship, may be lost in the mud. Yesterday I discovered that not everyone locally thinks the boat is there. In 1870 the vessel was sold for scrap to two local farmers, but some say it was taken off to be a houseboat. By that time the Beagle was actually famous, or perhaps notorious, but it was also a wreck. Designed in the days of sail, during the Napoleonic Wars, it was already a vintage craft in the 1830s when Darwin managed to turn it into the laboratory that proved evolution. It’s as though Einstein managed to bang out the Theory of Relativity while driving an Austin Metro.

On our inside is a new hill, of rubbish from London, that is now being landscaped with dusty soil. One day, I suppose, new vineyards may flourish here. We are moving into a very different kind of Essex to the one we entered a fortnight ago. Busier, noisier and more urban. It’s been creeping up on us for a couple of days: the occasional bit of subway with graffiti, paths beside metal fences overgrown with thistles, abrupt turnings through soulless parking lots where someone is running a business that needs razor wire, CCTV and screens. Privacy here is an obsession, like smuggling used to be.

We reach Shoeburyness when the tide is out. The sea is a grey smudge on the horizon. My foot is pulsing like a lighthouse warning mariners to stay away. I can barely speak, unless asked if I need beer. Tomorrow we will pass 400 miles, I hope. 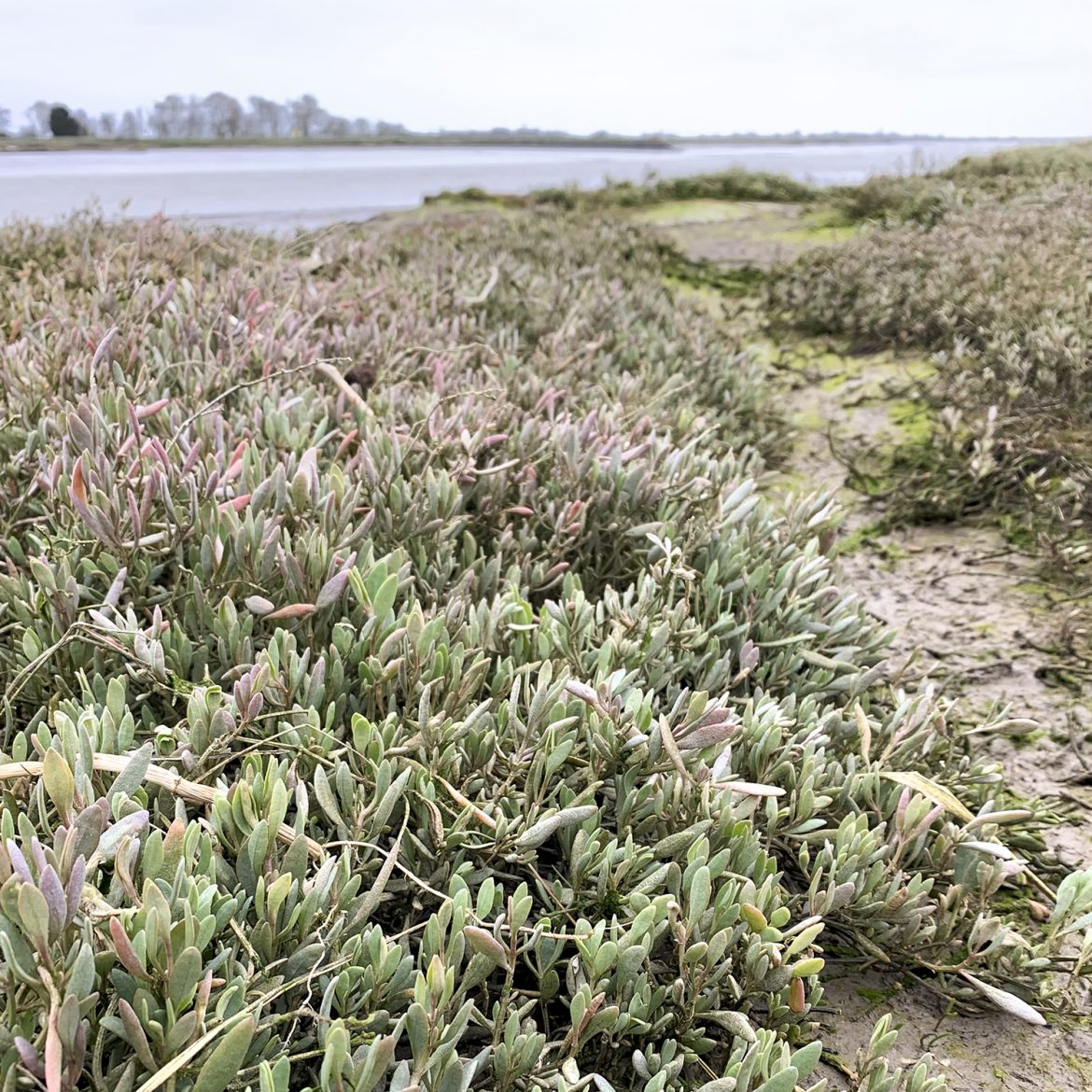 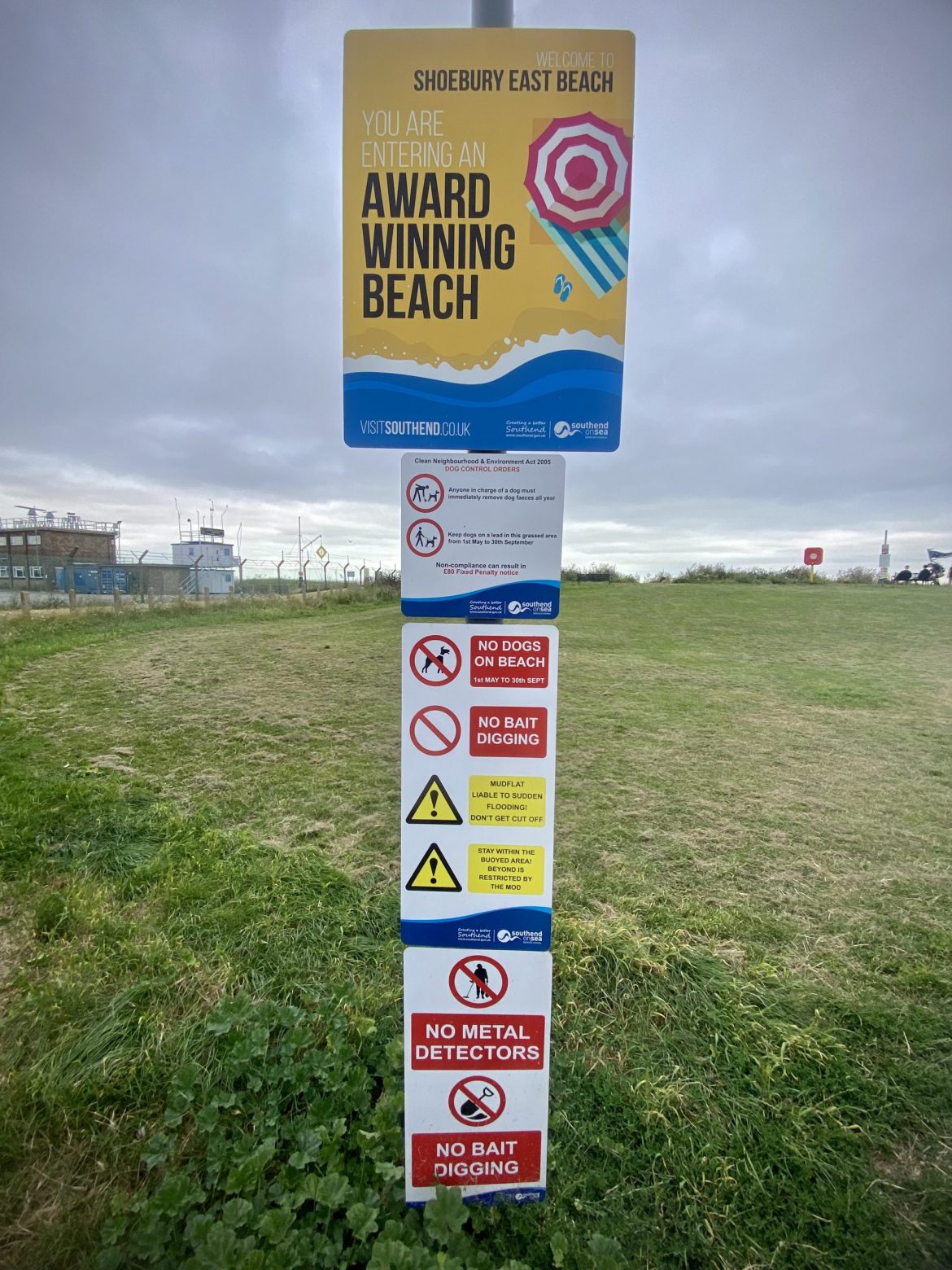 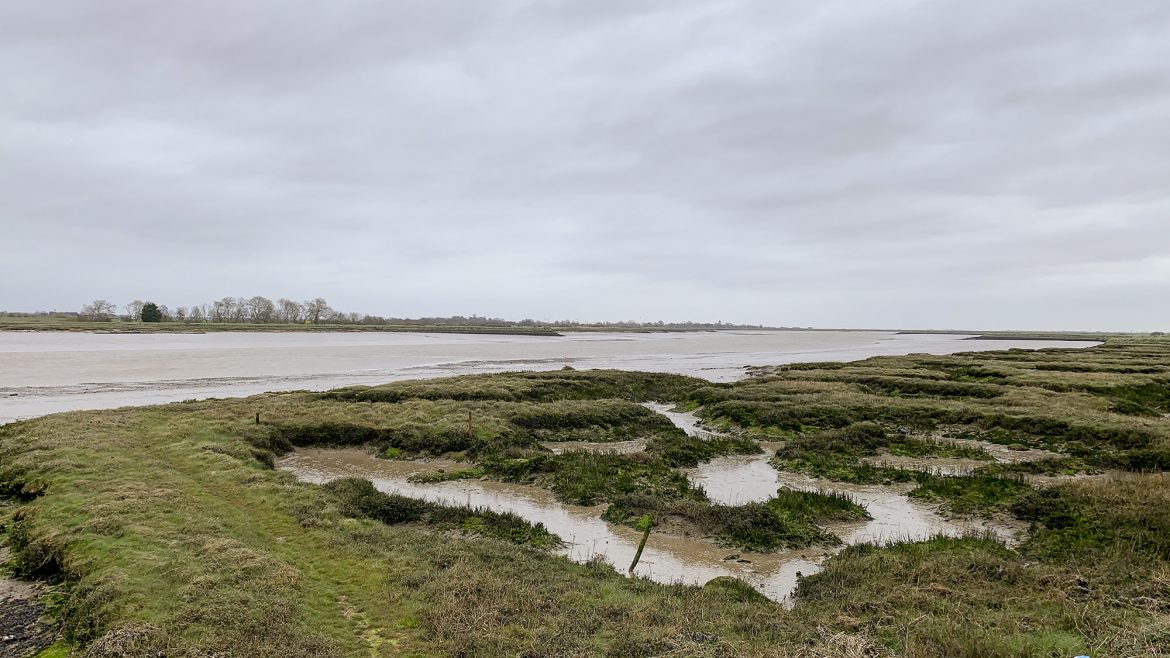 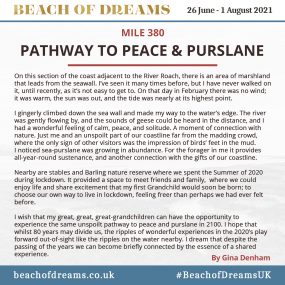 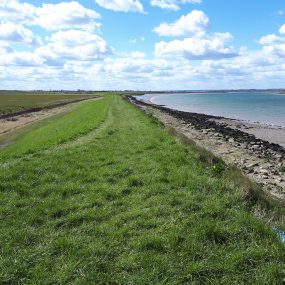 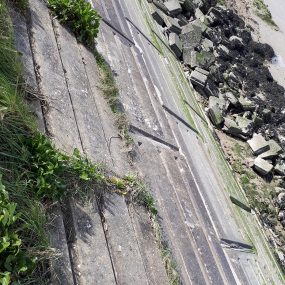 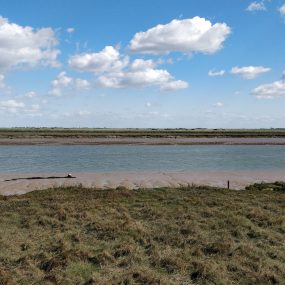 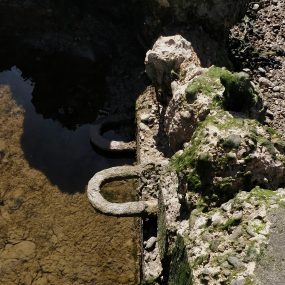 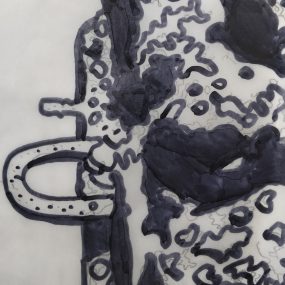 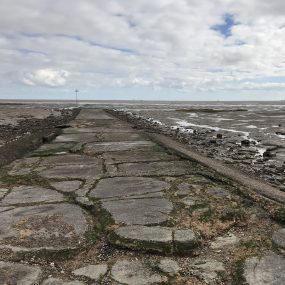 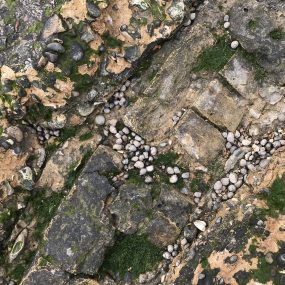 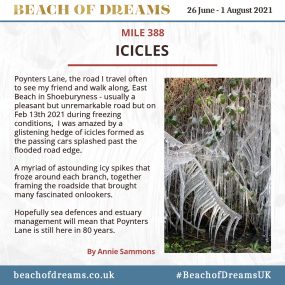 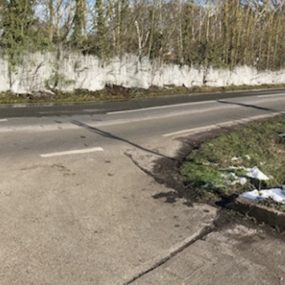 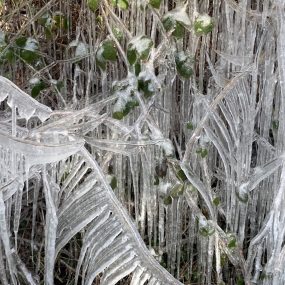 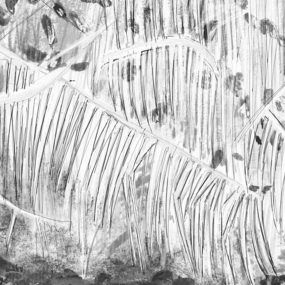