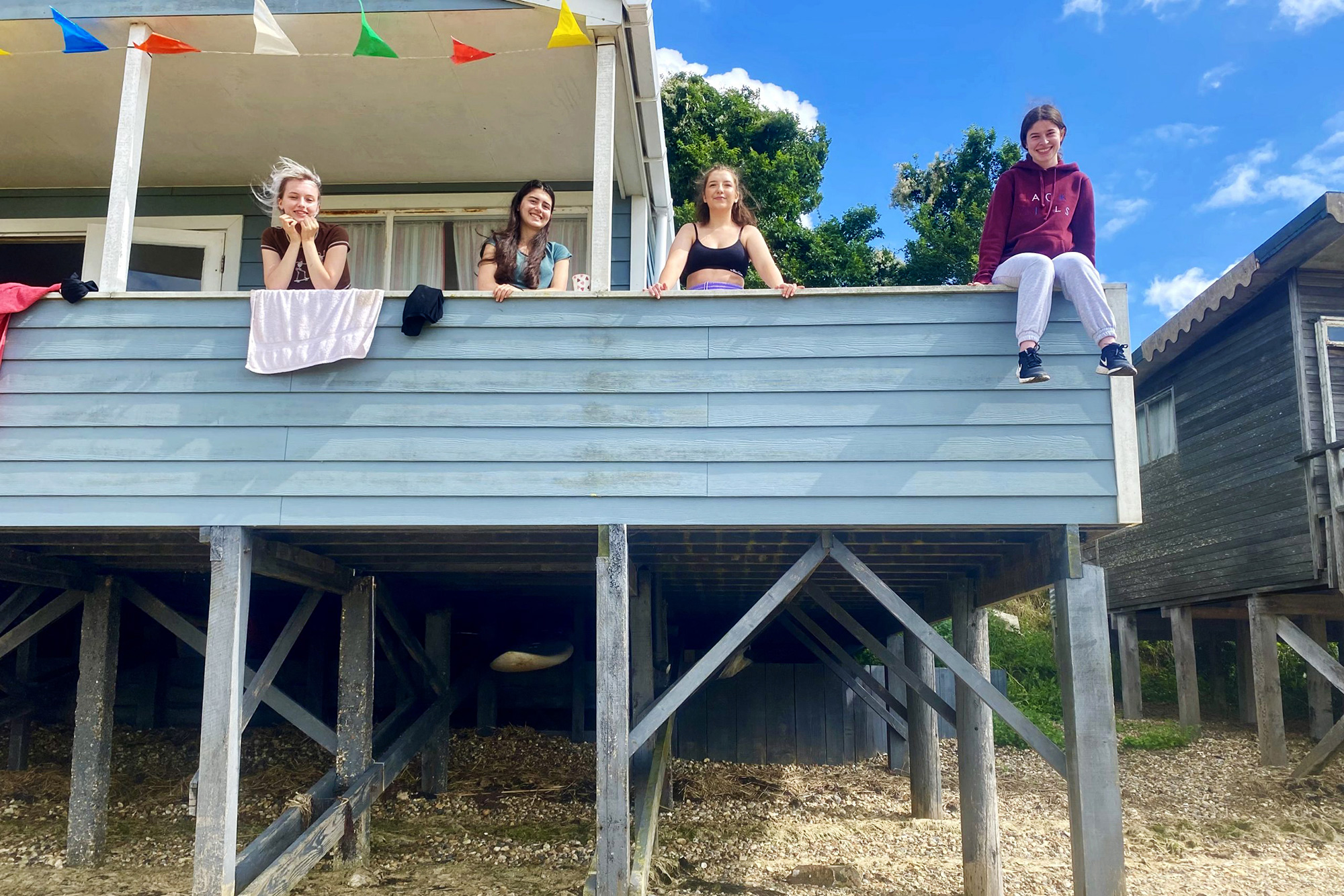 Some mornings you wake up and the world flinches. It takes a good look and crosses the road to avoid contact. Friends and family do likewise. But today is not like that. Today is a day when everyone wants to chat. I open the campervan doors and Geraint and Gary, our local minders, are walking across the grass behind Shotley Village Hall with big smiles. “Sleep well?”

Geraint fills me in on local feuds and gossip: there seems to be quite a lot, some of it serious. Disabled parking bay abuse seems to be rife. Gary has important weather information. “It’s going to come out nice.” I take my rubbish out front to the manicured lawn where the categorised bins are kept. There is a book bank crammed to the eaves. This is a community that gives generously so it’s worth seeing what they are throwing out: largely out-of-date yacht cruising handbooks and Holy Bibles it seems.

I had been told to post the Village Hall key back through the letter box, but just as I head there, Mike appears and suggests I give it to Geraint. When I do so, Geraint hops around the lawn in glee, “Oh, the village hall key! I can’t believe it, after all these years I’ve got my hands on it.” I glance at Mike: has he done it again? Anyway, it’s too late to retrieve it. Geraint has disappeared. Mike’s key curse, especially when it comes to village hall sets, so crucial to civilised community life, appears to be continuing.

We start where we left off in Dedham high street, a place where the genteel house-fronts are bearded with wisteria. The church is filled with colonial era memorials, one to a Flora Macdonald whose first husband died on a ship to Australia in 1881. She remarried a military man but died in Agra in 1896. Another marks the passing in 1802 of Major General Joseph Eyre, hero of the siege of Gibraltar, the stone erected by “his affectionate relict”.

We retrace our steps from yesterday passing Flatford Mill and heading down to Manningtree where we meet Michael who tells us to look out for Old Knobbly, a giant and ancient oak tree in the woods up ahead. “It was a hideout for witches,” he says. In fact Essex, and Manningtree in particular, went through a paroxysm of witch-finding that reached a climax when local lad and Witchfinder General, Matthew Hopkins, discovered a cabal of defenceless old women to persecute in the 1640s. His first ever victim, Elizabeth Clarke, was a Manningtree resident. A one-legged octogenarian whose mother had been convicted of witchcraft too, she confessed after several nights of sleep deprivation and was hanged. As we walk out of Manningtree and through the next village of Mistley we pass the two towers of a partially ruined church where Hopkins unmarked grave lies. Thank God he’s not here to sniff out Mike, the renowned key-curser.

In the street I stop to talk to Ron, a Northern Soul DJ, sitting in his hand-painted Bedford van. “I was inspired by lorries in Pakistan that I saw in photos.”

People must love it, I say, admiring the intricate floral patterns, a cat, portraits of Rik Mayall and suchlike.

“No, they hate it,” he answers grimly. “People say rude things, the sort of stuff that would get you shot in Manchester.”

Back out in the country Old Knobbly is easily found and wonderful, being almost ten metres in circumference. There are several other ancient oaks nearby. I’m now well behind the others and destined to never catch up. I meet Floriana, a cheerful smiley lady with a black labrador on a lead. She came from Guatemala 21 years ago. “When I reached Britain, it was winter. I rang up my mother and said, ‘I hate it here. All the trees are dead.'” She deplores the relentless building that’s going on. “Why don’t they build them up north where they need them, instead of making sight sores here?”

I wend my way down to the coast and walk between the tide marks, skirting inland around a nature reserve, then past some cabins on stilts. In one four girls, Sorcha, Olivia, Tallulah and Daisy, are leaning on the balcony, all just finished their A levels and full of vitality and plans. When I walk on, I reflect that the world can improve: at least those happy 18-year old girls will never be convicted of witchcraft or referred to as a relict. 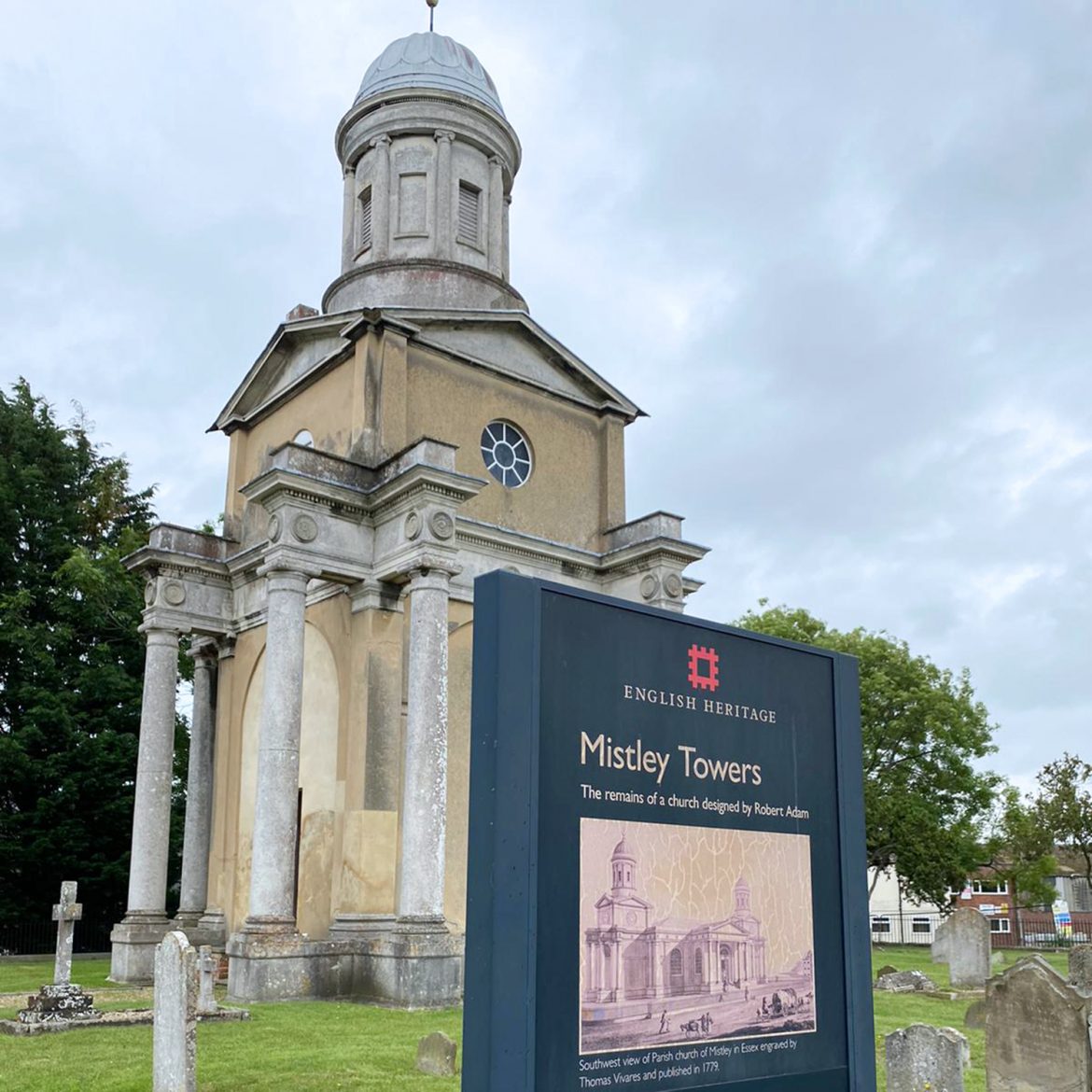 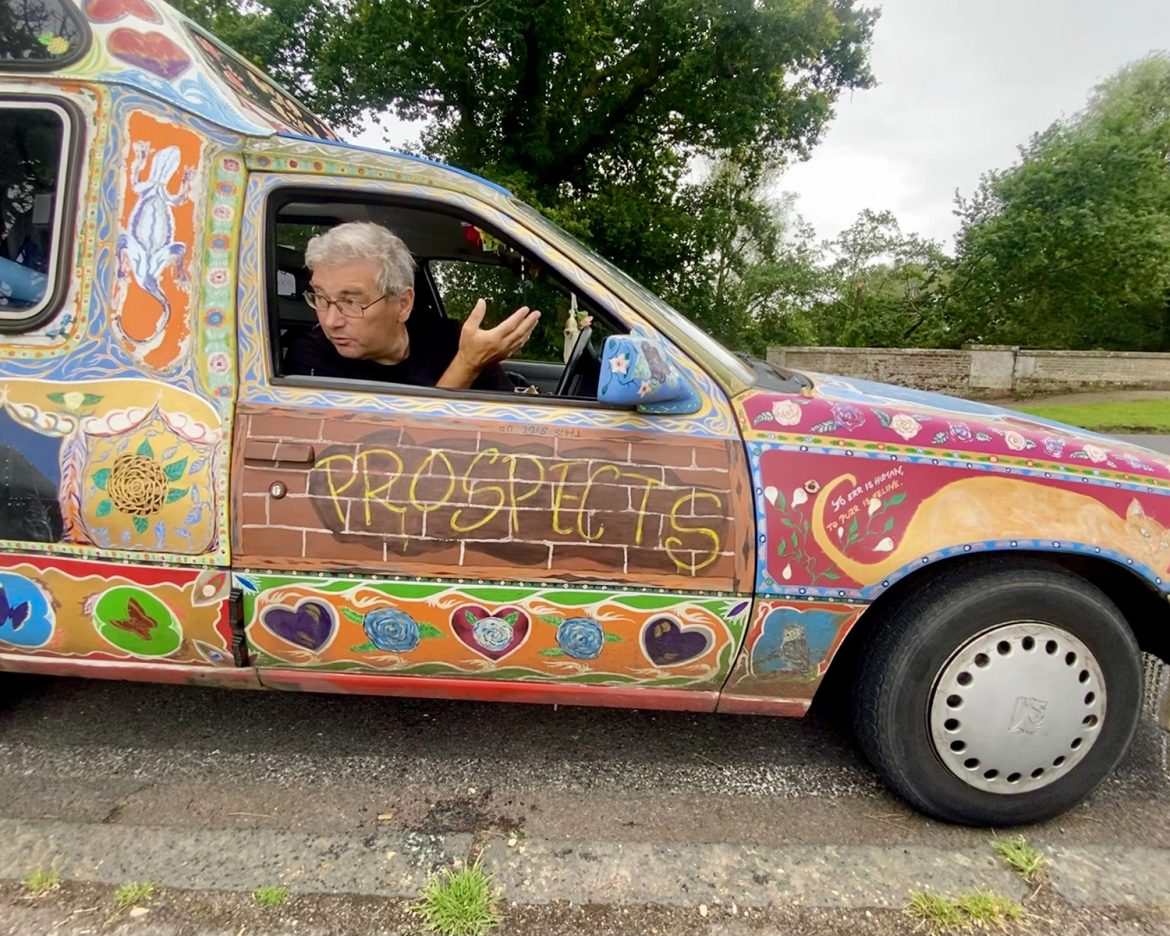 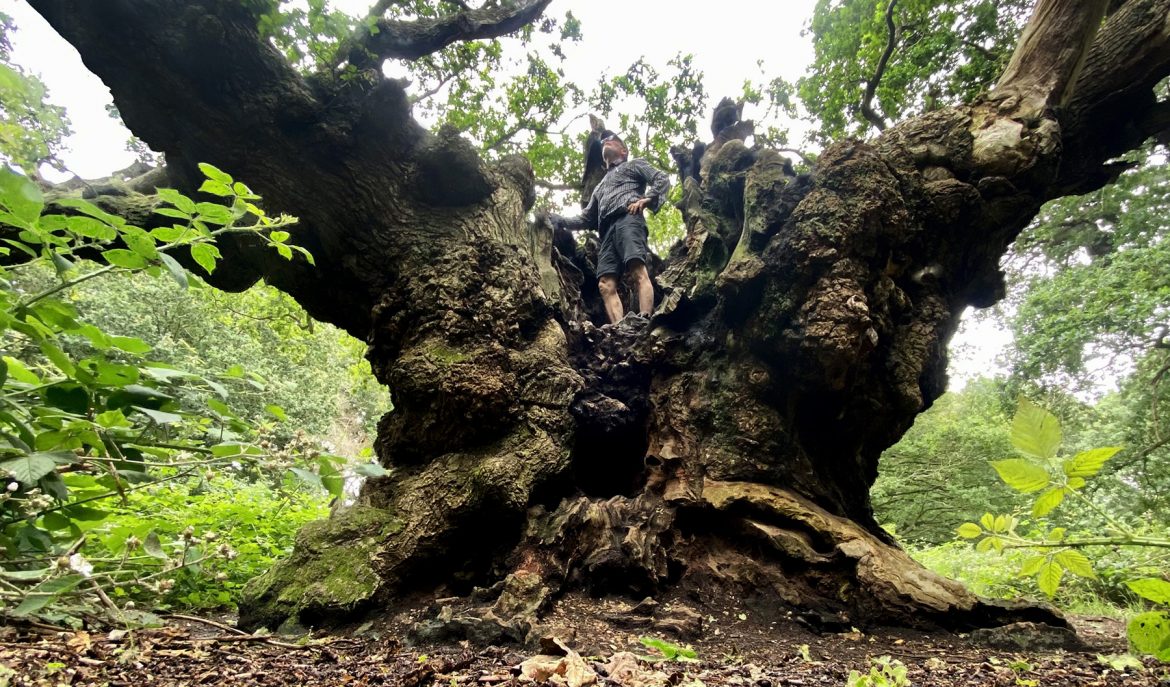 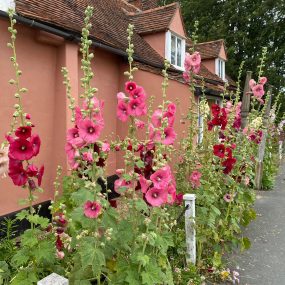 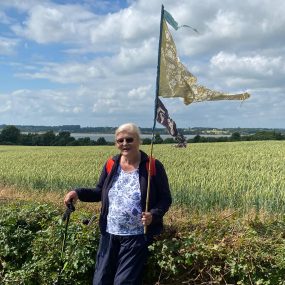 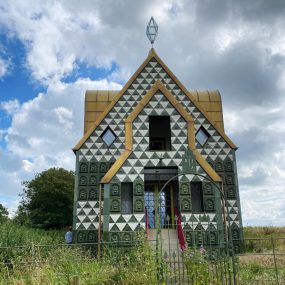 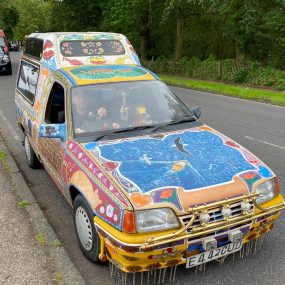 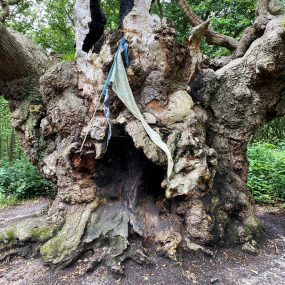 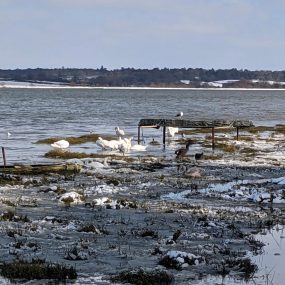 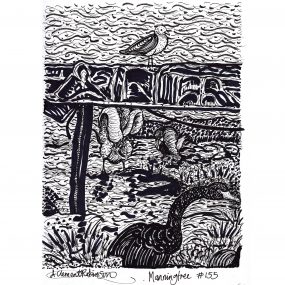 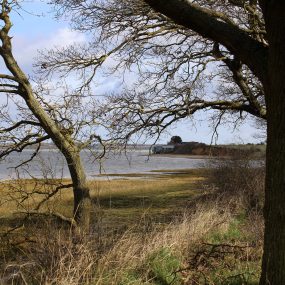 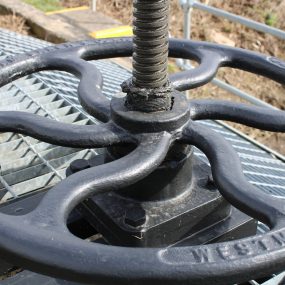 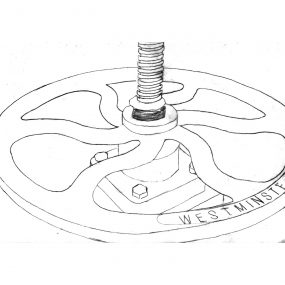 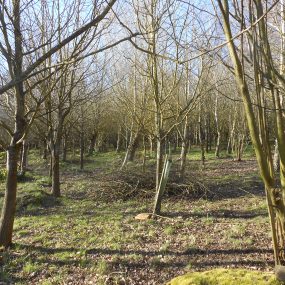 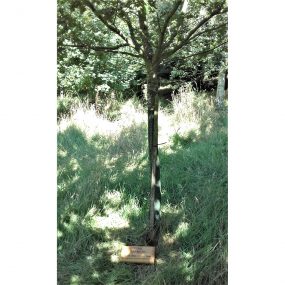