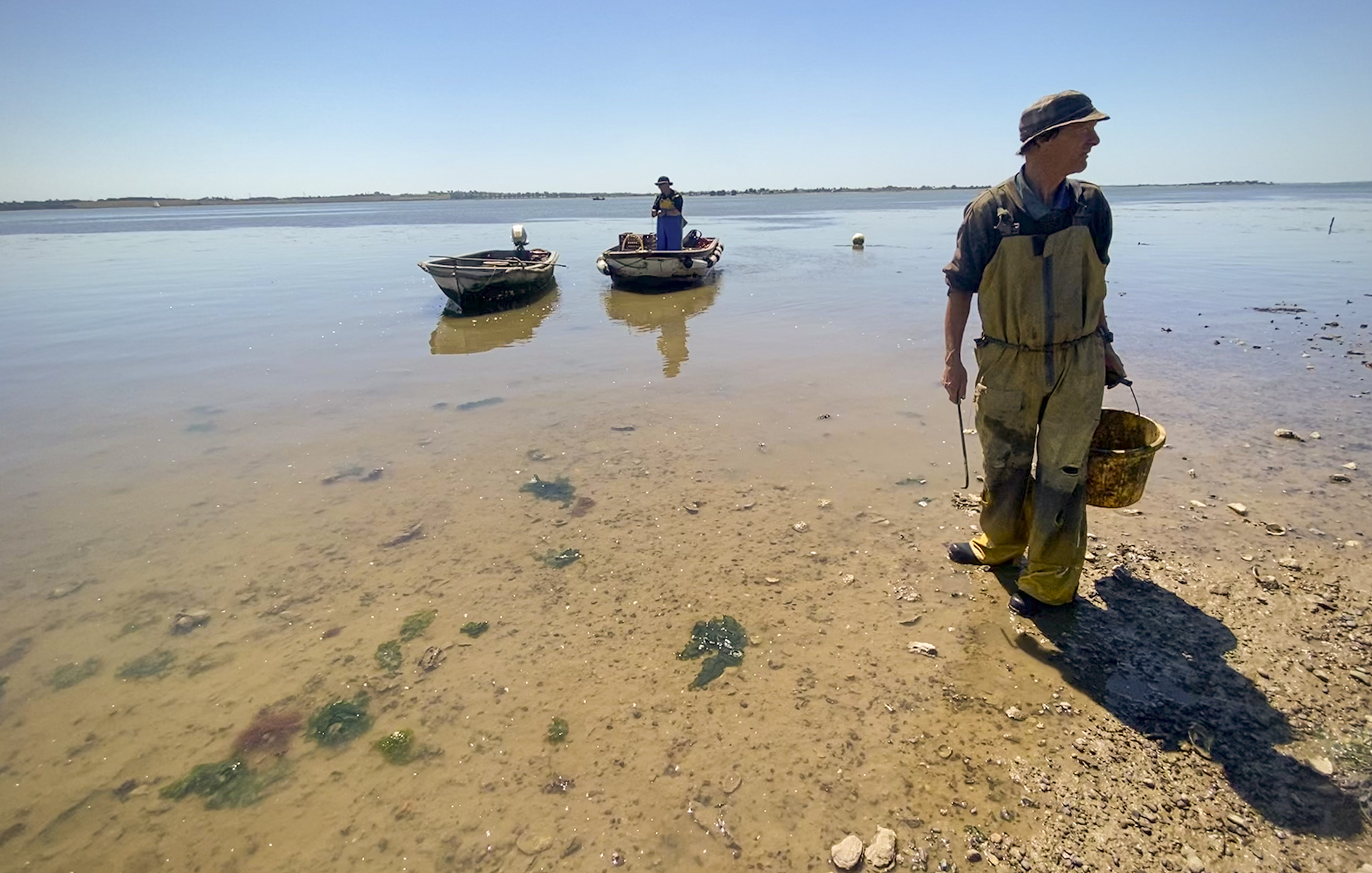 Every morning for over two weeks now, we have eaten porridge for breakfast, but today there is a massive treat at the start: a full English at the Tollesbury café right next to the start point on the waterfront.  The only problem is that I can barely stagger off down the sea wall, past the old sail lofts, then along the muddy creeks where boats in various states of disrepair sit in the narrow channels, linked to the sea wall by duck boards.

The walk loops out towards Mersea Island then curls back around a headland and into yet another arm of the Blackwater estuary. I bump into Derek on his early morning constitutional. When he speaks I think he might be Australian, but his accent, he tells me, is pure Tollesbury. Can he tell when someone is really from Tollesbury? He thinks about this. “Apart from sounding like an Aussie convict, there’s a village called Woodrolfe which real locals pronounce Woodrup.”

He spent all his career rebuilding sea walls before the Environment Agency sub-contracted the work out. Then he spent his time putting right what had gone wrong, and finally the sea defences were abandoned and Derek retired. “I reckon it got too expensive,” he says. The RSPB took over the management of the marshes that are all around us, but he thinks there are no more birds than before. “There’s certainly less marsh harriers,” he says, “And my brother used to catch eels, lots of eels. Hung up and smoked they was tasty.”

We stop at a bench and fellow walkers Cathy and Hazel watch as I remove boots and socks. “Eek. That looks horrible,” says Cathy, inspecting the damage to my fourth toe on the left foot, which after years of loyal service has downed tools and refused to go further. I snip away at it with my Swiss Army knife, aware that it must appear that I’m performing impromptu surgery. In fact it’s all the layers of plasters, compeed, silica gel pads, bandages and tissue. Once that’s all removed, the toe breathes a sigh of relief and doesn’t hurt so much. Walking on the flat sea walls all day on a sunny day is a tricky challenge. Hiking boots can be hot, but trainers and shoes fill with grass seeds.

The weather has resulted in lots of undergrowth and ticks. Everyone is talking about them. I check my feet. Essex is a hot spot for Lyme’s disease and even has a rare tick of it’s own, the Ornate Cow Tick which is particularly bad for dogs. The presence of Lyme’s disease is revealed in a bull’s-eye-like red rash around the bite.

Further along the wall I spot two men in two boats coming in towards the shore. I climb down the wall, totter across a section of matted sea weed to get out on the mud flats, then walk across to them. They have a stack of nets about the size of car tyres, all containing oysters. William is loading onto his boat while Michael empties others into a holding pen made of sticks stuck into the mud. Is it good business?

“Not so much this year,” says William, “There’s a herpes virus come over from France that’s affecting them. Plus all the new paperwork. It’s no surprise to us that we got forgotten. You have to remember that the entire fishing industry in Britain is worth less than some high street chain stores.” I’ve no idea if this is true, but the fact that oysters are suffering their own pandemic, no doubt after human involvement, seems harsh.

“He chips their shells and murders them,” says Michael, “And I look after them.” They both laugh about it. I suddenly feel cold water in my boot. The tide is coming in and has risen six inches in as many minutes. Our conversation continues as I steadily retreat back across the mud and up the bladder wrack.

I tell them I ate oysters on Mersea. “Naa. Rubbish. Tollesbury oysters are the best, come over to Woodrup and get some.”

Eventually I can’t hear them any longer and shouting goodbye, head off again. It’s a long hot day, but lovely, especially when we are approaching Maldon and two Thames barges raise their tan-coloured sails and move past in stately fashion.

We reach Maldon as the water sparkles with late sun over the boats. As we sit in the Jolly Sailor pub, I notice John’s arm. There is a livid red rash around a bite mark on his forearm. 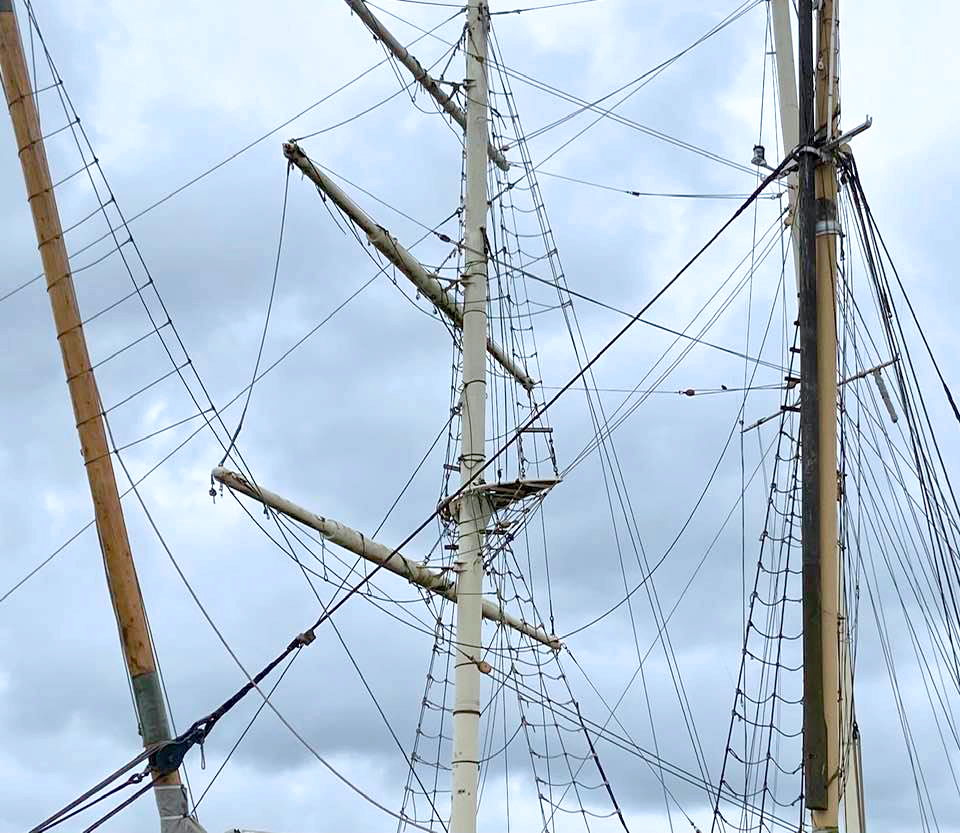 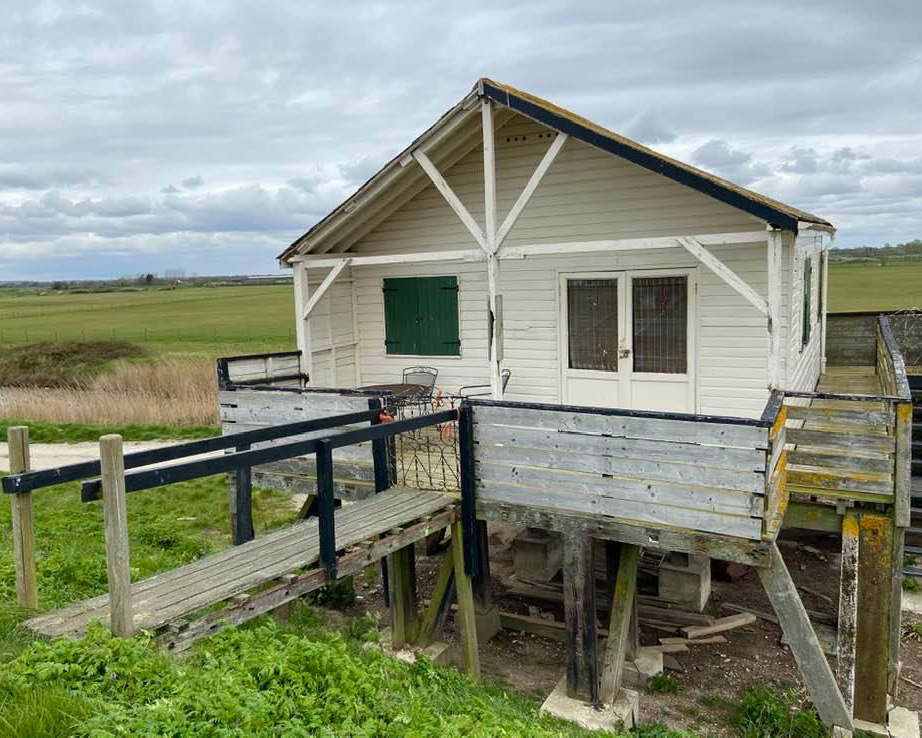 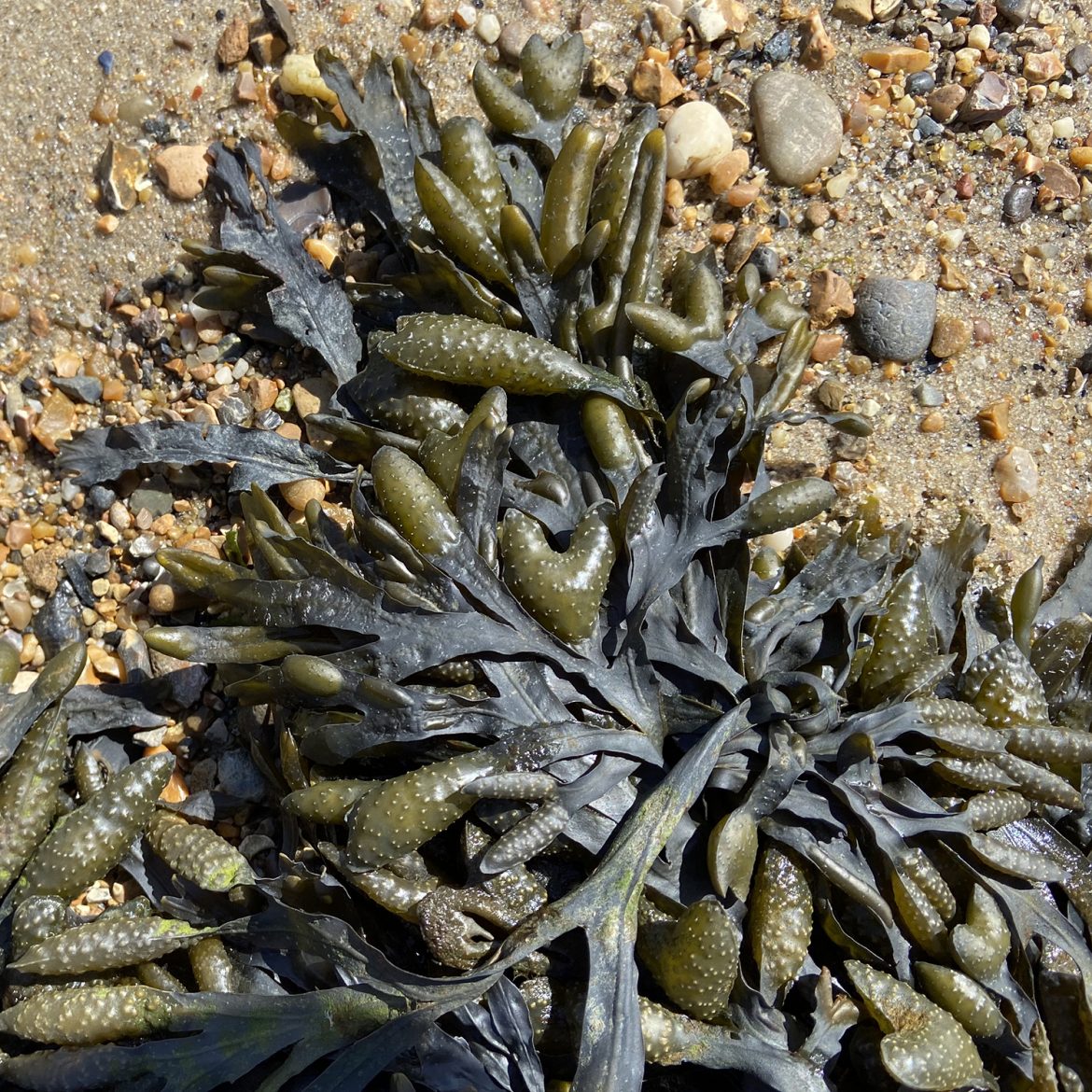 See all the mapped miles on the Storymap, find a selection below. Slideshow photos are by Mike Johnston. 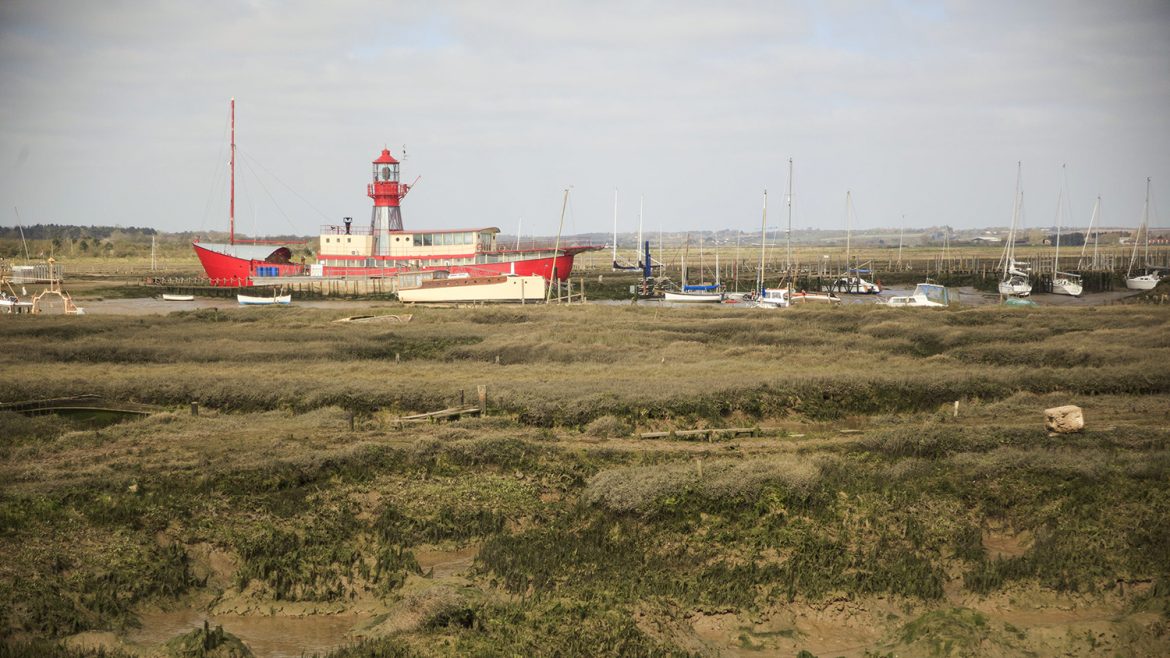 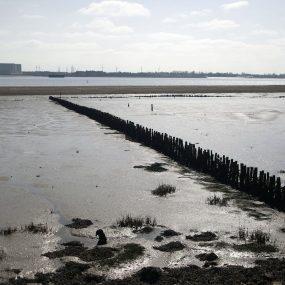 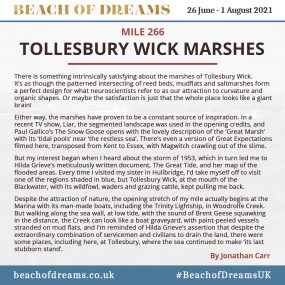 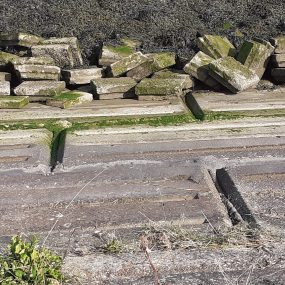 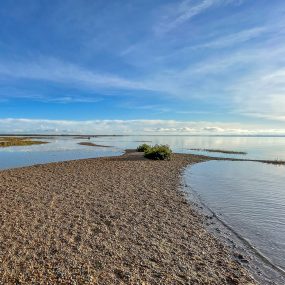 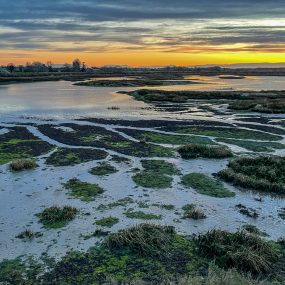 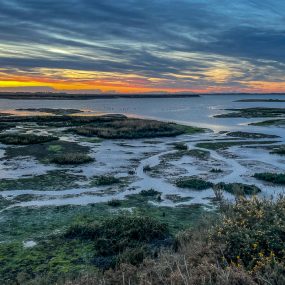 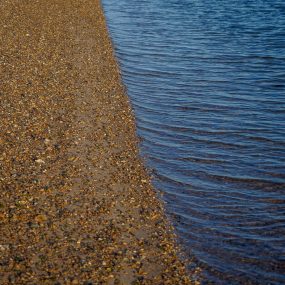 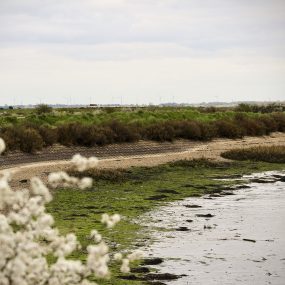 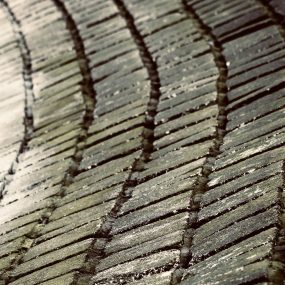 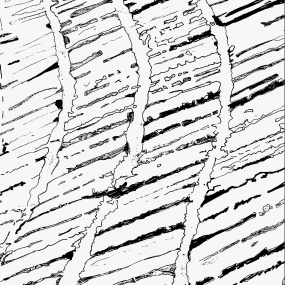 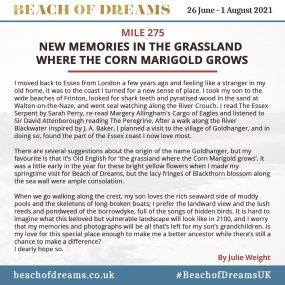