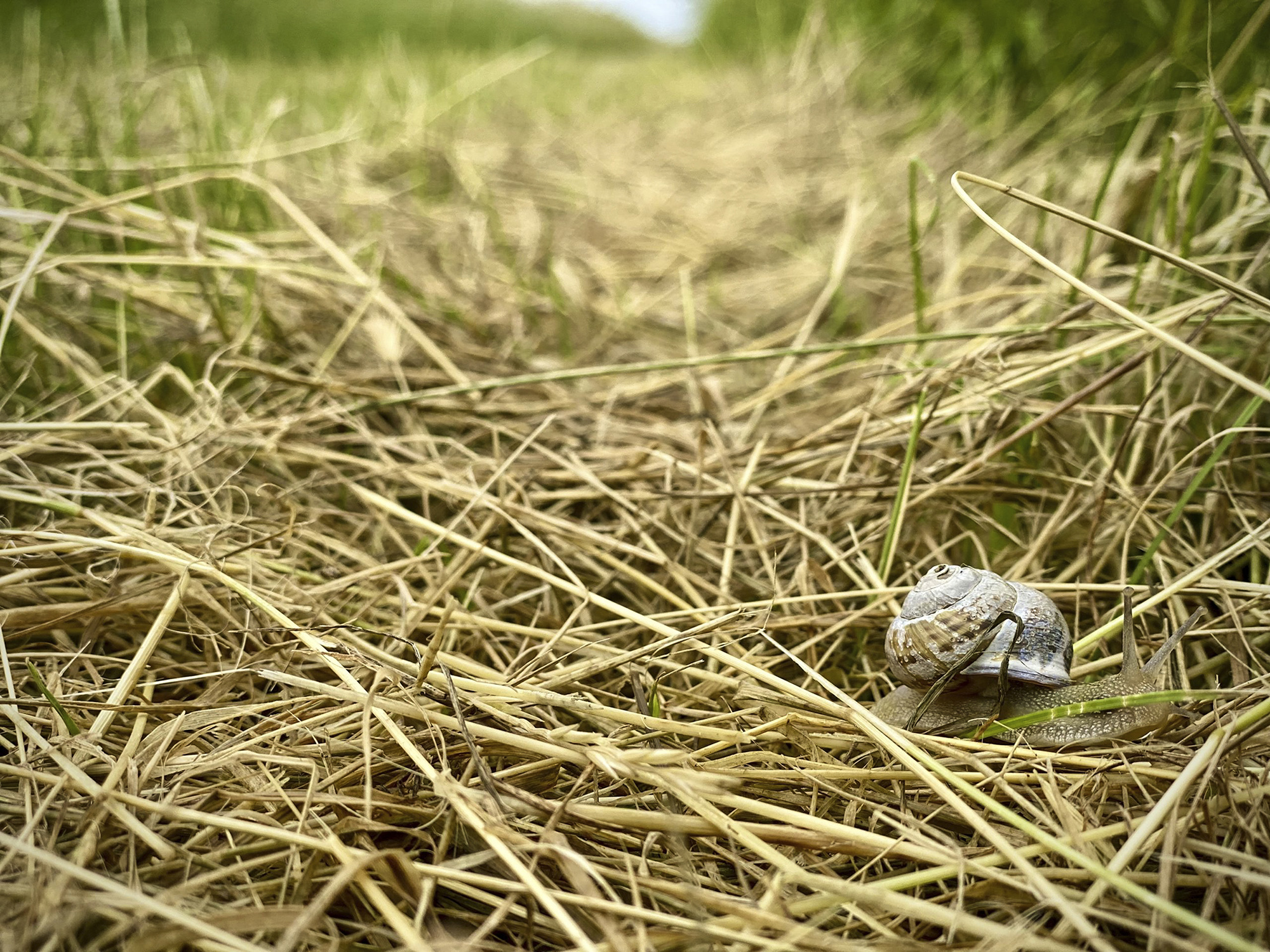 Back at Jaywick Martello tower this morning for the start of our walk. There we are joined by a couple on mobility scooters who have motored down the sea wall from Clacton to do a mile with us. Gloria and David used to own a caravan behind the beach here and have come for an emotional reunion with their old haunts. Gloria’s mother, who died of Covid last year, used to live in the caravan and they had joined her in 2008 to look after her. “I’d been made redundant from a lifetime of working in the public sector in London,” says Gloria, “When we came here, I thought my life was over. What did I know? It was just starting!”

She would sit out on the shingle at Jaywick and write poetry while watching birds. One day a group of swallows settled nearby and the mother bird seemed to be teaching the youngsters to fly out to sea and come back. For a few days this happened, then one day the mother led the brood out and Gloria watched them keep going, heading for Africa.

She had begun a masters course in Human Resources at Middlesex University that required her to do a dissertation somewhere away from the university. “I thought I’d go to Milton Keynes,” she says, “But they suggested Tanzania.” One day while changing trains at Camden Town she had a mystical experience. “People who aren’t religious might not understand, but I was walking down the platform when I felt everything suddenly go very slow. Then I came to an advertisement on a wall that said, ‘You are going to Africa'” It had been a genuine ad, but Gloria knew it was a sign. She agreed to go to Tanzania. Once that was done she got a job that took her to Mozambique, Kenya and many other countries.

Her love for this coast, however, never faltered. The family would come for holidays and she would sit out by the sea remembering her childhood. Once a whale was washed up and she had sat with her back against it, thinking it was a giant rock. It was in 2007 when the urge to write poetry had suddenly come upon her. “It’s like a gift, not a talent. A talent is something you can work on and improve. This is a gift from Heaven and I never know if it will continue, but it has.” Her son, Matt, reads her poem about the beach here. Gloria can never read her own poems: “The connection with it is too emotional.”

We walk a mile with Gloria and husband David, but when the concrete surface becomes grass they turn back. Ali, John and I continue, but I’m soon dropping behind. The grassy path is covered in snails that are intrepidly using it to move. I stop to watch them and become totally absorbed. Time slows down. When I look up the flags of Ali and John are out of sight. I want to go slow and take in everything: this flat featureless landscape is paradoxically rich in every other respect. How much we miss by hurrying: the South African sea figs growing on a south-facing wall, the found treasures in the window of a cottage, the shirtless tattooed man on a bike – everything seems filled with the possibility of back stories and interest.

I finally catch up at Point Clear. We are on the Blackwater estuary, a labyrinth of muddy creeks where we meet Jane whose family own a boatyard. We soon arrive there: a lovely cluster of boats of all shapes and sizes, many historic vessels converted to idiosyncratic homes. Passing one boat, Maplin, we bump into Pauline who shows us around. Her boat had once been a minesweeper and is built of mahogany, presumably to prevent it setting off magnetic mines. It is filled with curios, cats and vinyl records. “I bought the boat off Hippy Bob who said he got it off Lord-someone-or-other, and I suppose I became a hippy in the end myself.”

We walk around the end of the creek and come to Jane’s Thames barge, Edme, a sturdy wooden sailing boat. “It was built in 1898 in Harwich,” Jane explains. “It’s job was to carry malt from the Edme factory in Mistley.” I love these connections. We walked through the factory premises several days ago and I still remember the rich aroma of the place.

Behind the boatyard a new housing estate is about to go up, one vehemently opposed by locals. There are also plans to extend another boatyard, threatening the rights of navigation in the creek. Then, for one short and horrible section, we struggle along a dangerous and busy road instead of using the sea wall which is blocked by a quarry and a holiday village. A man in a car bellows abuse. Many slow down and give us space, a significant minority do not. Government plans to build a coastal footpath seem pitifully inadequate here: a quick soundbite never followed up. The landscape appears to be the plaything of the rich and powerful and any public access to our coast easily swept aside when it suits.

A mile before Brightlingsea, our destination, we are met by a welcoming committee of two cheerful ladies who escort us down to the harbour. One is a batik expert, the other knows everything there is to know about Brightlingsea. This journey, and the people we meet, continues to astonish me. 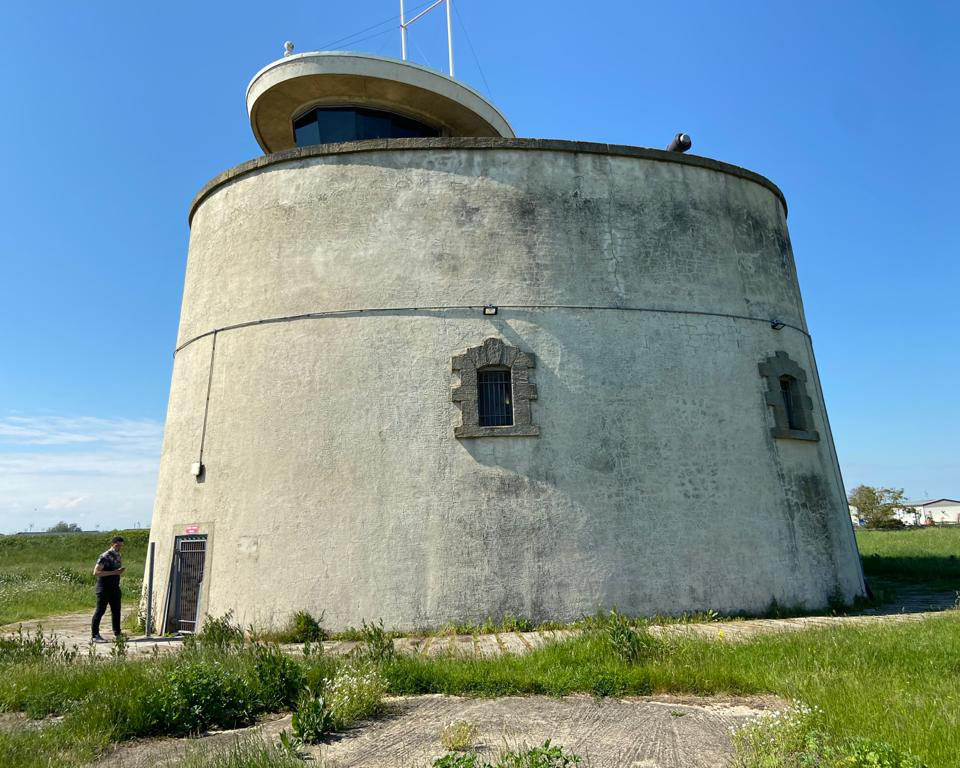 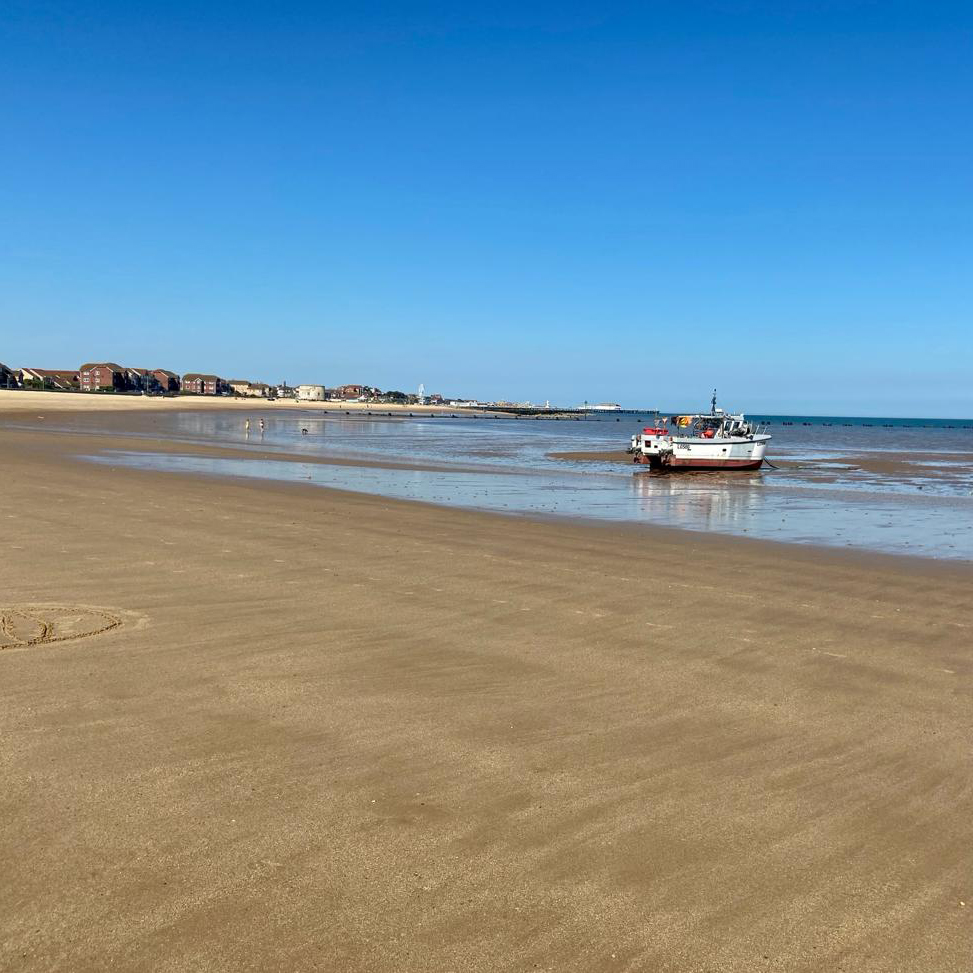 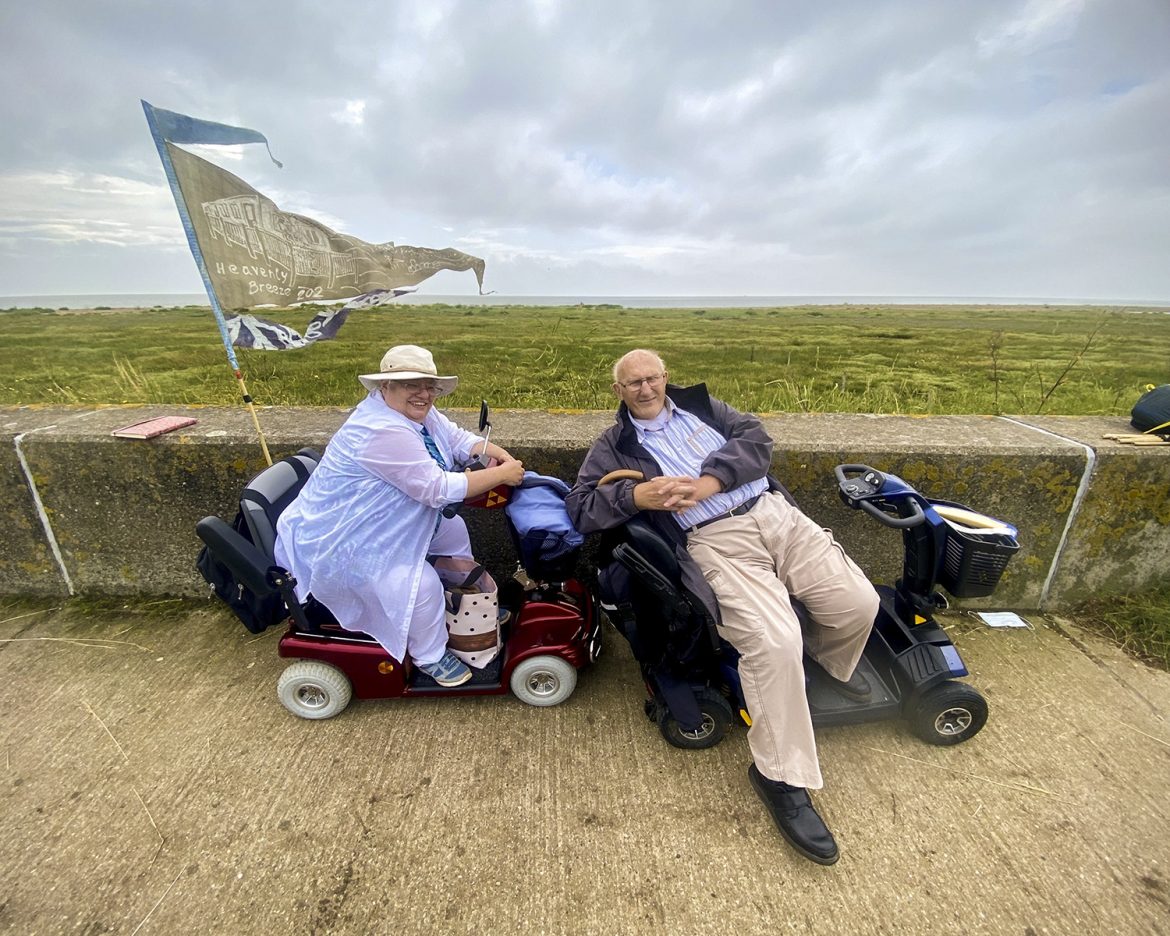 Gloria and David at Jaywick 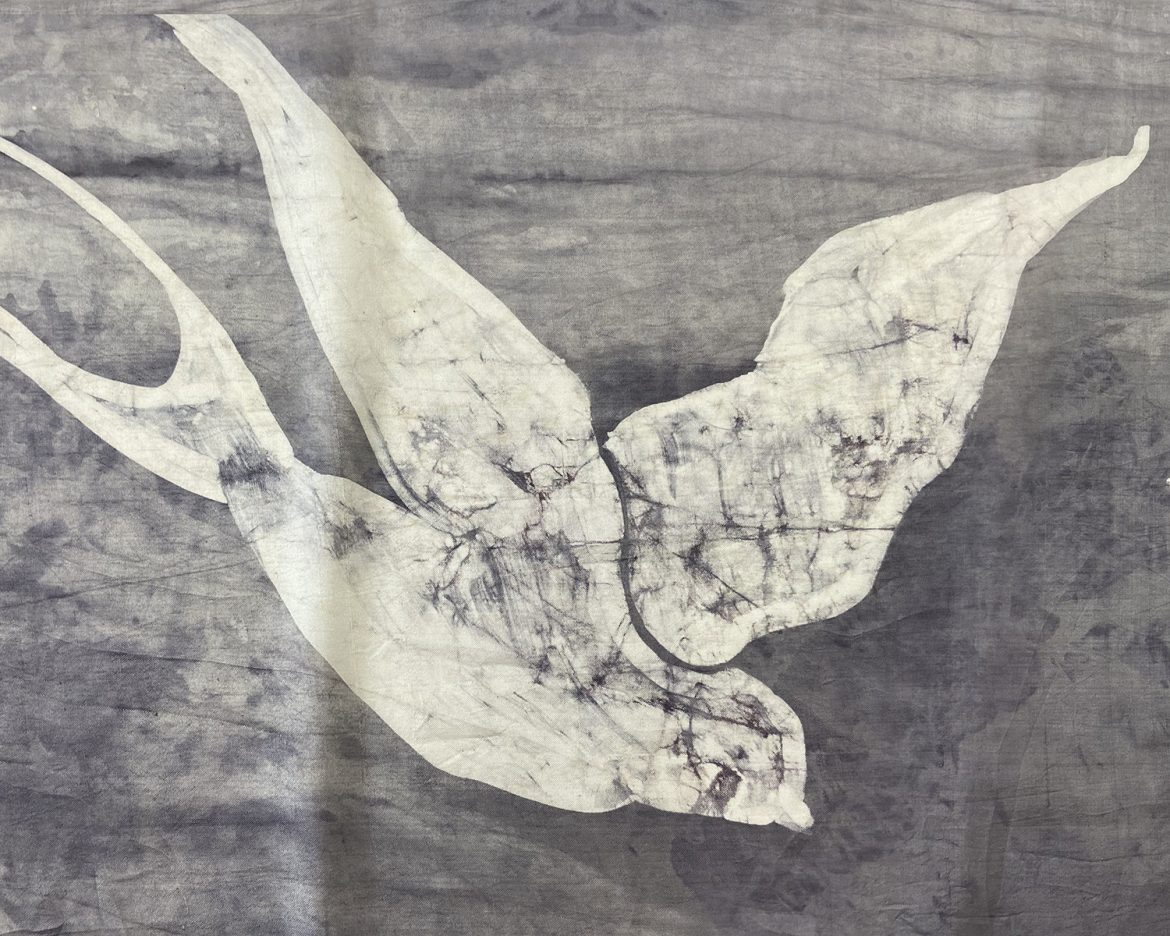 See all the mapped miles on the  Storymap, find a selection below. Photos in the slideshow are by Mike Johnston. 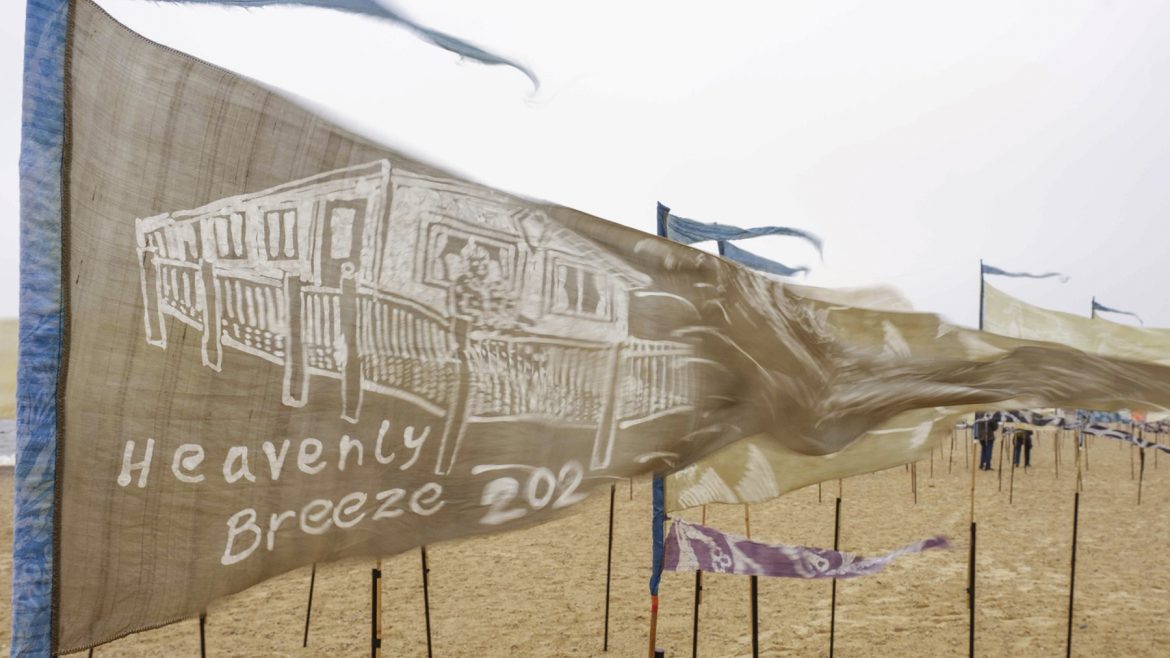 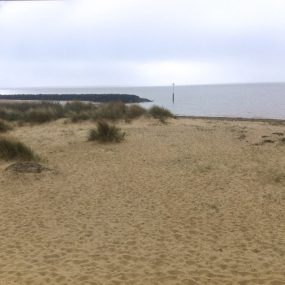 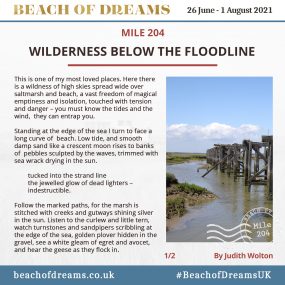 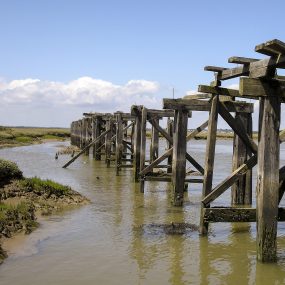 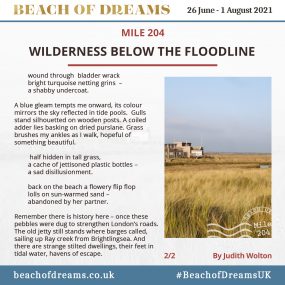 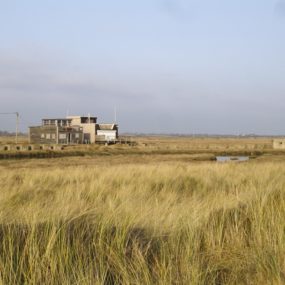 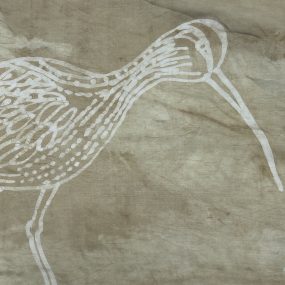 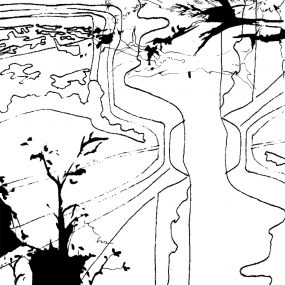 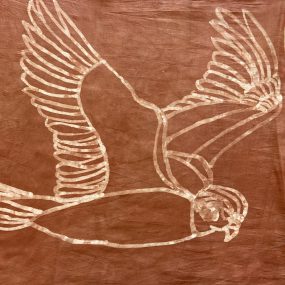